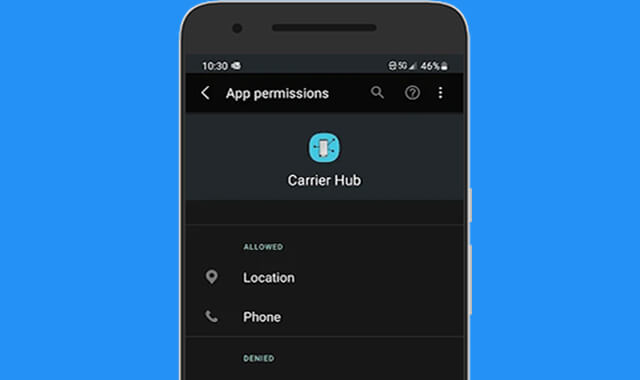 Carrier Hub is an official app of the T-Mobile/Sprint network that helps establish connections with the cell towers and provides necessary network features such as Voice over Wi-Fi, Secure Wi-Fi, etc. Users using phones that operate on these two networks often notice this app running continuously in the background and wonder whether it is a valid app.

Well, Carrier Hub is a genuine service-related app that is required when using certain network features on T-Mobile or Sprint. Its main function is that it helps connect with the near cell tower so you can have better network strength for calling, using the internet, etc. In this article, we will explain the Carrier Hub app as well as provide solutions to the problems encountered by its users. Let’s begin.

What is Carrier Hub?

It is a Sprint/T-Mobile network-based application that is a must-have app when using the network on phone for better communication over call, Voice over Wi-Fi, internet browsing, enabling Secure Wi-Fi, etc. Carrier Hub app continuously runs on the phone and helps provide a good experience by well connecting you with the nearby cell tower. It is also engineered in a way to provide fixes by customer support regarding your network-reported issues.

Moreover, Carrier Hub comes pre-installed on some phones, and in case if it doesn’t exist on your phone then you will be prompted via a sticky notification to install it from the Google Play Store or Apple Store (if you are an iPhone user). There are two versions of it available on the app store, Carrier Hub by Sprint and another one is Carrier Hub Magenta by T-Mobile USA. You can simply use the Carrier Hub because Sprint has merged with T-Mobile on 1st April 2020.

Why You Need Carrier Hub App?

Carrier Hub app becomes important for users using Sprint or T-Mobile networks because it enables useful features that enhance the overall user experience of using the network. However, by installing it on your phone, you will have Voice over Wi-Fi that will allow you to call anybody over Wi-Fi. This type of call usually can’t be traced by your network operator since it uses the internet instead of the cell tower for calling.

Another reason why you need the Carrier Hub app could be the Secure Wi-Fi. It is a privacy-centric feature that provides end-to-end encryption between your device and the Wi-Fi connection. This is considered more secure and private Wi-Fi because it is not only password-protected, the connection is also encrypted.

Moreover, aside from useful features, Carrier Hub is necessary if you are on Sprint or T-Mobile network as it maintains the network strength and also helps connect to the nearest cell tower so you face fewer call drops, surf the internet without hassle, get better video call quality, etc.

For the ones who are concerned about their privacy, the app only collects usage data to diagnose issues and to overall improve user experience.

Issues Carrier Hub can Cause on Phone

Carrier Hub is not the most stable network-related app especially after its new update for fulfilling the Android Q requirements. And because it is not stable, it can cause several issues to arise on your phone that can disturb your day-to-day phone use. Here are the issues commonly faced by Carrier Hub app users.

There are quite many negative effects of using Carrier Hub and the issues mainly have started to pop after the recent update for compatibility with Android Q. Still, with proper configuration and customization one can handle or at least minimize the negative impacts on their phone.

Carrier Hub is not one of the silent apps, it actually does notify about pretty much everything it does in the background such as letting users know when it is trying to connect with the cell tower. So, basically, most people mainly notice two processing requests from Carrier Hub on their phones, let me explain them one by one.

These two notifications have started appearing since the delivery of Carrier Hub and few other clients by OTA update to users using Sprint/T-Mobile network. If in case you want to get rid of it, there are some workaround that you will need to perform.

How to Uninstall Carrier Hub App

Carrier Hub is also identified as “com.sprint.ms.smf.services“, it is the name of its package that we can target to uninstall from our phone. Due to its system-based nature, it cannot be uninstalled normally using the uninstall feature. We will need advance permission like root access to permanently uninstall. Nowadays, it is possible to root any device safely in a few minutes.

After rooting our phone, we can use applications like System app remover to uninstall system apps and packages. Moreover, if you prefer not to root your phone in order to uninstall Carrier Hub, you can still uninstall it using your PC with the help of PowerShell or Command Prompt. Let us provide you guide for both use cases.

This should uninstall the Carrier Hub from your phone permanently. Now, let us show you the next method.

So, there you have the Carrier Hub uninstallation guide for both Android and PC. The steps are easy to follow and work all the time. After uninstalling, if you previously faced network issues, simply go to connections>Network settings>reset the network to fix problems like call dropping, text not sending, etc. Furthermore, you can reboot your phone to have a fresh start.

You May Also Like: Lia Informant: What is it on My Phone?

Do I Need Carrier Hub?

Carrier Hub is not a necessary app, it has been delivered to users via OTA update after the merger of Sprint and T-Mobile. It is helpful and offers additional network features such as Voice over Wi-Fi, Secure Wi-Fi, etc. If you want to use these features then you must have the Carrier Hub app installed. You can remove Carrier Hub to continue to use the network with the basic features such as voice calls, text messaging, etc.

What is the Carrier Hub app for?

Carrier Hub is made for enabling additional network features and product services to users who use Sprint/T-Mobile network. It was launched after the merger of the two networks mentioned and since then it has been known for offering modern network features such as Voice over Wi-Fi, Secure Wi-Fi, etc. Moreover, it also helps to connect to nearby cell towers and provides consistent network strength.

Is Carrier Hub a Spy App?

Carrier Hub is an official app from Sprint and T-Mobile network, it is not a spy app. It is born right after the merger of Sprint and T-Mobile. It was delivered to the network users via OTA update and it now offers network-based features that enhance the overall user experience.

How to fix Carrier Hub App not responding?

Carrier Hub app not responding is a common problem faced by almost all users. There is no need to worry about it as it can be solved by following a few steps mentioned below.

What is Sprint Carrier Hub?

Read More: IoT Hidden Menu: What is it on My Phone?

Carrier Hub is one single app for users of the Sprint/T-Mobile network that performs in the background right after the phone reboots and helps establish connections with cell towers that are near. For people living in rural areas or simply the place where a few towers are installed, Carrier Hub will help you a lot in this case.

However, it is a complete package of better network strength and features. From taking care of consistent network connectivity with cell towers to offering modern network features, it makes all available for Sprint/T-Mobile network users.

So, that’s it. Hopefully, now you have got a complete insight about the Carrier Hub App and what it is for? If there is still anything you want to know about it, comment down below. We will be glad to answer it for you.