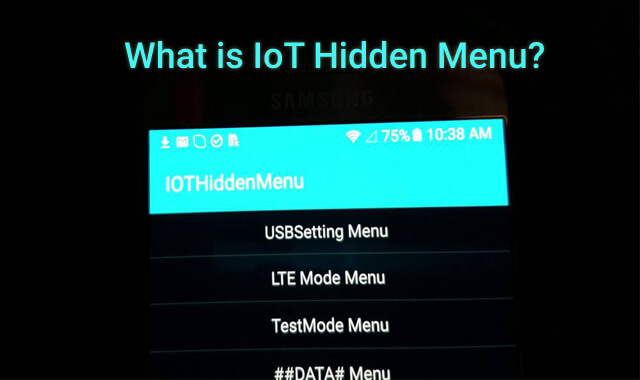 IoT Hidden Menu is kind of a secret setting that pops up when you dial some code on your Android phone. Since the beginning of Android, these types of hidden options, also known as easter eggs have been part of the OS that we can still explore by performing a set of actions on particular marks. By default, these underground options have been added for Android users to explore and take advantage of in need.

The fact is massive users of Android still aren’t familiar with the IoT Hidden Menu and how they can access it. Even though it has been available for ages, it still contains some fascinating options and also helps find hardware faults. In this article, we will uncover everything about the IoT Hidden Menu including the secret codes that perform specific tasks when you dial them. Sounds exciting? Let’s begin.

What is IoT Hidden Menu?

It is one of the easter eggs on Android that when uncovered, we get to see a couple of unique options mainly related to checking device condition. For checking device hardware faults, there are color and touch testing options for display, vibration testing, receiver testing, speaker testing, and more. Each of the hardware tests lets you thoroughly check for defects i.e For testing display touch, it tells you to tap on different areas on the screen.

Also, there is a Sensor option which is incredibly useful because it shows the available sensors on your phone as well as their second-to-second stats. This way, you not only get to know how many sensors and what sensors your phone has but you also get to see whether they are working appropriately. Apart from these hardware diagnostic options, the IoT Hidden Menu also contains some system modification options such as Factory reset, Advance Network settings, etc.

The availability of these options under the IoT Hidden Menu can vary from device to device. Most of the options that we mentioned will be found on the majority of the latest Samsung Android phones. You can type *#0*# on the dialer on your phone to access the menu. In other Android phones, if nothing happens when you dial the code then it is likely that your phone doesn’t have IoT Hidden Menu enabled.

Before you get your hands on this secret setting, you probably want to know the features that it provides. Well, we have listed all the features below that are found in the IoT hidden menu.

All these options will be found under the hidden menu in the latest Samsung Android phones. In old models, you might see some additional options such as Factory Reset, Network Tweaking settings, etc. These options no longer come in new models as these were not helpful and benefited users hence Samsung removed them.

Similar to IoT Hidden Menu, there is a System UI Tuner that is known for modifying Android’s certain interfaces. It is a hidden setting that Google has implemented for Android users starting from the Marshmallow Android version. It mainly contains experimental features and some of its features have already turned out to be really useful now almost every new Android phone comes with that i.e Do Not Disturb mode.

System UI Tuner is basically for explorers who are curious to get their hands on new features early that could become part of the Android OS officially in the future. Also, because it contains testing and experimental features, some phone brands such as Samsung, and LG have excluded this from their custom Android builds. All smartphone brands are free to add or exclude it if they are not fine with it.

How to Enable System UI Tuner on Android

If you want to check whether System UI Tuner is available on your phone, you will have to follow a similar process like accessing IoT hidden menu. But you don’t have to dial any code, instead, you have to tap on a particular mark to enable it. Here’s how to enable System UI Tuner on Android.

Once you enabled the System UI Tuner, now you can modify the battery icon, show hours and minutes in the clock, customize the status bar, show the embedded battery percentage, etc. Also, there is a Power notification control option that features 0 to 5 levels.

You May Also Like: What is OsuLogin on Android? Know all About it

Now you already know about two of the hidden settings on your Android phone but you still probably don’t know about the hundreds of hidden secret codes. These codes are programmed and added to the core that we are going to share here. Upon dialing the combination of codes, you can perform specific tasks without even doing it from the usual way i.e the available interface.

Before you dial any secret code shared below, make sure you read the outcome carefully since some codes can perform system modification. Here are the useful Android secret codes that you can try.

There are hundreds of secret codes instilled in your Android phone but we have listed only the useful ones. So try them and explore the hidden programmed codes.

IoT Hidden Menu is not the hottest topic and neither there is a knowledge base on it. Considering that, you probably have questions in your mind about it. Well, don’t worry as we will be answering the most frequently asked questions related to it here.

What is the IoT hidden menu?

IoT Hidden Menu is a hidden setting on Android phones that contains some useful features. By accessing that, we can run various diagnostics and find possible defects on the hardware level. Besides that, we can also see the available sensors on the phone as well as their status from second to second. In old phones, the menu also contains an Advanced network setting, Factory reset option, etc.

How to Open IoT Hidden Menu on Android?

To launch IoT Hidden Menu on your Android phone, you first need to open the dialer app and then dial *#0*#. As soon as you enter the last symbol of the code, the IoT Hidden Menu will pop up on your screen.

Is IoT Hidden Menu available on all Android phones?

No, it is found mainly in Android phones from Samsung. To confirm whether the hidden menu is there on your phone or not, type *#0*# on the dialer app. Perhaps, nothing will happen upon dialing the code if your Android phone brand is not Samsung.

How can I access IoT Hidden Menu on Non-Samsung Android phones?

We can access similar features to IoT hidden menu on Non-Samsung Android phones via System UI Tuner. It is a hidden setting that Google has implanted in Android from the beginning of the Marshmallow Android version. It does contain numerous options to customize Android certain interfaces that aren’t already provided in the phone settings.

We can enable System UI Tuner by swiping down the control center with two fingers and then tapping and holding the gear icon until a little wrench icon appears beside it. After that, we should go to phone settings and there should be the System UI Tuner below the Developer options.

Read Also: What is Carrier Hub? Know Everything About the App

IoT Hidden Menu is not a new thing in the Android ecosystem. It has been in our Samsung Android phones since the early Android versions like KitKat and Jelly Bean. Unlike the other easter eggs i.e the hidden developer option, the IoT Hidden Menu is less known but it can be quite useful for many. From showing hardware details to helping to find hardware defects, it is all there in it.

Also, the secret codes that we shared are great shortcuts to perform certain tasks without using the available interface. Knowing the important secret codes will always save you time in locating or accessing the features. Moreover, if you are not a Samsung Android user then there is System UI Tuner for you. It is as cool as IoT hidden menu and comes with extensive useful features.

So, that’s it. Hopefully, now you are pretty much clear about everything related to IoT hidden menu and what is it. If there is still anything you are doubting, make sure to ask in the comments below.