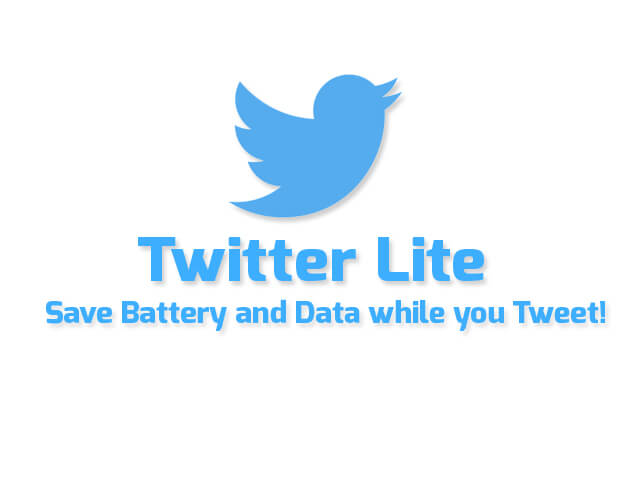 Have you tried every possible way to maximize your phone battery? Yet another lite app launched recently for Android that saves battery than its original version app. That’s a Twitter lite app! Using this lite app for your Twitter work will save your time, battery and storage. This is not from those apps that Eat battery Power fast. However, it is so lite means it has only required features instilled that perform when only needed. And that ultimately saves battery, storage and your Android phone stays healthier.

So, in this article I will explain and guide you about twitter lite App like how to customize it, the difference it has, how benefits it to your Android and stuff like that. So, let’s start this article and let me explain what actually twitter lite is.

And then the company decided to launch the twitter lite App for those phones who aren’t compatible with the Twitter original app. Twitter lite is very low in size, It almost contains 3Mb space only on the entire phone.

With this twitter lite app, you can do everything that you can do with the Original twitter app. Sounds No difference between? Well, there are some differences that I’m going to show you.

Must Read: 30 Best lightweight Android Apps that can Save Your Battery and Storage

The major difference between Twitter Lite and Twitter App is Interface and functions. Meanwhile, both have the same aim and features but lite one has limited functions and that’s the reason it loads fast and takes less space in the phones.

You can run twitter lite for a long time in your Android than the original twitter App. Because the twitter lite version eats less battery than twitter original app. Now let me break down it for you so, you get clear about everything.

Loading time on both of the apps is almost the same but here the Lite version of Twitter is better than the Twitter app. However, after doing an experiment on loading time I have been found that Twitter Lite loads 0.1 – 0.2 Seconds faster.

This is not a huge difference but it matters a lot to some users like me and you. And I also find out why it loads fast than the original one. And its because Twitter lite has fewer functions than the Twitter app.

Make sense? If not then let me explain a little bit! There is the simple logic behind fast-loading, it’s less baggage. The more weight (Function) an app has, the later it loads. That’s it.

Related – How to Easily Load Website Faster You Visit – 5 Tips!

The features matter! Users love the Options in apps and that the Twitter app has. But in lite Version, there are less. It has but less and only Required. And that’s why it is lite and loads fast.

Ok, so you know enough about Twitter Lite and the differences. Now let me show you how to Install and User twitter lite on your Android for free.

Read More: 7 Unique Features of YouTube Go that you have to know if you use it

Note: I’m showing you this because it’s not easy to install Twitter Lite on Most of the Android phones.

Use Twitter Lite on Android and Save Battery and Data

Here are the steps you need in order to use the Lite version of Twitter on your Android Phone:

Follow these steps and save more battery power than ever. Dark mode drastically reduces the overdrawn of the battery. So, I highly recommend using this feature to you if you really want to save a lot of battery and surf the twitter lite for long.

Read it too: 5 Ways to Save Battery Power In Laptop and Other Devices

There are too many things to cover on this topic but I have cleared the most important. The lite version of a Twitter app is just amazing if you want to Save battery and Data. It really saves my battery, I experienced it.

I must say you should adopt this Lite app of Twitter if you use this platform. Because using this app will deliver you the best User experience you ever dreamed of.

So, hope you enjoyed this post about twitter lite tutorials. If so, please comment and ask anything about it and I will get back to you in 5 minutes.