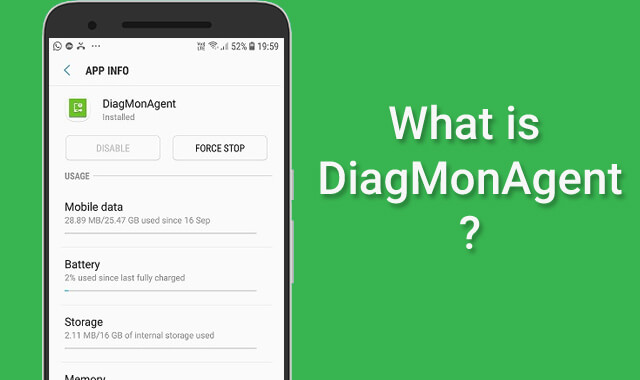 DiagMonAgent is one of the system apps that are mainly found in Samsung Android phones i.e Galaxy S6, Galaxy A5, etc. It is a Diagnostic agent that helps Samsung with monitoring the diagnostics on its user’s phone. If you are using any Samsung Android phone with Lollipop OS installed, you are likely to see DiagMonAgent notification whenever you turn your WiFi ON.

It usually runs in the background and sends diagnostic reports to Samsung to help them improve the user experience. You can see it running on the notification bar from time to time whenever it does that. Also, it sometimes suddenly stops working that can easily be fixed. Well, In this article, we will explain What is DiagMonAgent and how you can fix the stopped issue notification. Let’s get started.

DiagMonAgent stands for Diagnostic Monitoring Agent, it is a Samsung system app that is first implanted from Lollipop OS update for Samsung phones. Like any other system service app, its work is to send diagnostic reports to Samsung so that they can improve user experience through updates. After the phone completes its boot up, DiagMonAgent starts running in the background.

Since it is a system package, there is no app icon to manually launch it. We only get limited control over this app like force stopping, clearing cache, etc. The functionality to disable DiagMonAgent via app settings is also inaccessible. Though, keeping it on the phone as it is known to be harmless. Also, it is known to only send a certain amount of details such as App crashes, apps instability, compatibility, navigation error, etc.

Similar to other system apps, DiagMonAgent requires permission on Android to run and perform the task it is made for. If you are curious to know what permission it needs then you can check it by yourself by going to Settings>Apps>DiagMonAgent. After that, look into the permissions tab. By default, the “telephone” permission is allowed and you cannot revoke it since it is allowed by your Android system.

DiagMonAgent is a pre-installed Samsung system app that is considered safe to keep it running as it is on phone. The app is only available from Lollipop and onwards, you will not find it in Android KitKat or lower versions. The Diagnostic report that it collects is only shared by Samsung and that also with the purpose to fix apps issues that cause a bad user experience. Hence, it is no doubt a safe app and you shouldn’t worry about it.

Also Read: IoT Hidden Menu: What is it on My Phone?

Samsung Android phone users who upgraded to Android Lollipop from Android KitKat have complained about two issues related to DiagMonAgent. Here, we will explain both of them so you can better understand them and possibly find working fixes.

DiagMonAgent has stopped is a pretty common issue that Samsung smartphone users face after updating to Lollipop for the first time. What happens is suddenly a pop-up appears on the screen saying “DiagMonAgent has stopped”. This type of pop up often sends by the Android system whenever certain apps on Android stops responding. This issue mostly appears on Galaxy S6 after updating from Kitkat (4.4.4) to Lollipop (5.0.1).

How to Fix DiagMonAgent has Stopped

As soon as the DiagMonAgent has stopped message pops up, close it first and then follow the steps below.

This simple workaround has helped many fix the “DiagMonAgent has Stopped” issue. If the issue persists then there is one permanent solution; Uninstalling DiagMonAgent. We will provide you with more details on it later in this article.

How to Stop DiagMonAgent from Sending Diagnostic Report

If you don’t want DiagMonAgent to send any diagnostic report to Samsung, you can try force-stopping it via the app settings interface.

This can temporarily stop the DiagMonAgent from sending the diagnostic report or at least till the next phone reboot. For a permanent solution, you will need to uninstall it or use Package Disabler Pro to disable it on your phone. Let us provide more details on that.

How to Get Rid of DiagMonAgent?

If you are getting annoyed by DiagMonAgent notification or you often getting DiagMonAgent has stopped message, you can get rid of it safely. There are two popular ways to shut up the DiagMonAgent application on your Samsung phone.

Package Disabler Cloud is made for Samsung smartphones that enable users to easily disable system apps or packages. The app requires no root permission but it is also not free to use. You will need to pay $4 to purchase a subscription. After that, you will be able to safely disable any system app on your Samsung phone. Also, Package Disabler Cloud allows re-enabling disabled packages.

That means this is the safest method to get rid of DiagMonAgent. However, you can see if your phone works fine after disabling DiagMonAgent. If it does then you can keep it disabled otherwise you can re-enable to get back to normal. Here are steps to use Package Disabler Cloud to disable DiagMonAgent.

This will disable the DiagMonAgent on your Samsung phone. Note that Package Disabler Cloud uses the Device Administrator permission, it doesn’t require root permission.

This will permanently uninstall DiagMonAgent from your phone. So, please be sure about your decision before clicking the confirm uninstall button.

Read More: What is ConfigAPK? Is it Safe to Uninstall from Android?

DiagMonAgent is a harmless system app that comes with the Lollipop update for Samsung phones. Its file size is less than 2Mb and barely consumes resources on the phone. It is known to run in the background and sends diagnostic reports from time to time to Samsung once the user turns WiFi on. While it is totally safe, its behavior can interrupt you when you are in the middle of something. Especially, the “DiagMonAgent has Stopped” issue.

In that matter, you can either use Package Disabler Cloud to disable the DiagMonAgent or choose to uninstall it completely with the help of System app remover. Before doing these, you can also try force-stopping it and clearing the memory cache.

So, that’s it. Hopefully, you are now aware of DiagMonAgent and how to solve the DiagMonAgent stopped issue? If there is still anything you want to know, the comment section below is open for you.