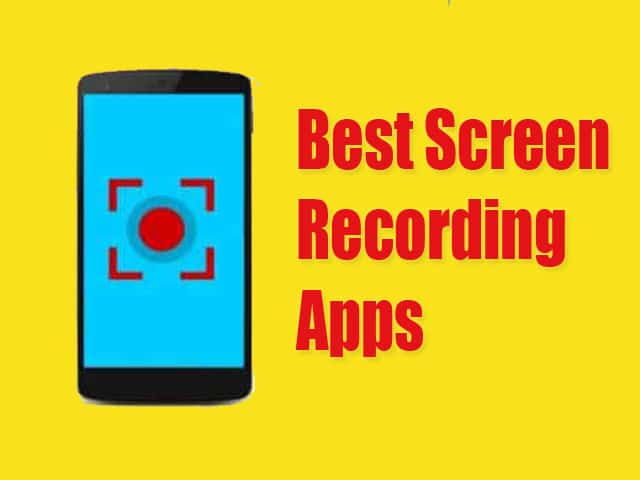 And that’s why we have curated a list of Best Screen Recording Apps. All the selected Screen recorders are best because it’s all tested and then listed by us. Well, we recommend trying them all and then pick one which suits your Android device. Although, picking will be easier for you because we have mentioned special features & quality of all screen recorders.

Note: Some of the screen recorders that we have listed below may not work in the KitKat version of Android. Don’t be sad! You can also check out the best Screen recorder for Android KitKat.

Screen recorders basically capture the entire screen of an Android phone in video format and save it in the storage upon user action. With a Screen recorder, you can capture the entire screen & whatever happening inside on an Android device with a pause and continue recording feature. You can anytime start the recording and pause in case things go in the way you don’t want.

To finally save the recorded video, you will need to click on stop and in most cases, the recorded file automatically gets saved in your phone storage. That’s how most screen recording apps work.

Read First: How to Record Screen in Android Phone with Internal Audio

If you are looking for a Gameplay screen recorder then I highly suggest going with this because it has a feature that allows recording gameplay without degrading the performance. And from my 9 Best screen recording apps collection, this one is what I prefer you to use at first place to record.

It has an easy recording system in both modes; gaming and desktop. You can anytime start, pause, and stop the recording. So, whether you want to record the Gameplay screen of any game like PUBG Mobile or want to normally record the Android screen, I prefer the Game Screen Recorder.

AZ Screen Recorder – No Root is a very popular screen recorder. At some time its hype was at the peak and there was no other well screen recorder for Android except AZ. This screen recording app is almost used by all the video creators and also hated by old Android users. Old Android users hate it because AZ does not support in Android KitKat version or lower. It needs Android Lollipop or upper to run.

Hah! AZ will never know the Power of Kitkat.

Well, this AZ Screen Recorder will fill your screen recording needs with its dozens of features. Also, the AZ screen recording app is featured in Google Play Home page, Android Police, Yahoo News, CNET, Android central, Droid-life, and more. Overall, it is a well suitable screen recorder for any type of recording like making the video tutorial, recording gameplay, etc.

GU Recorder app will give the quality as well as the ability to record the screen at the level you want. Like recording screen at 60fps. Your phone may fail to deliver the hardware requirement, GU Screen Recorder will not downturn at providing the rich quality recording. You can also adjust the recording quality at medium, low, or according to your device hardware to boost your recording. If your Android device is beast and has great specifications then GU Screen Recorder will provide you the best screen recording experience. It can record your screen on max settings up to 1080p, 16mbps, 60fps.

Moreover, you can record your screen with Facecam and take clear screenshots. For better screen recording, there is also a pause & resume feature. Overall, it is a great Screen recorder for all Android phones. So, must try it.

Another best screen recording app that already has won the heart of over 70 million creators in 2016. Mobizen Screen Recorder is people’s favorite screen recorder because its the only one who supports all the Android versions. And this recorder is fully compatible with the Android KitKat version.

You don’t need any extra skills for recording video, you just need common sense to get started with Apowersoft. Even you can just install it and start recording your Android screen since its default Video settings are great & optimized for most Android phones. It can record your screen on best settings i.e 60fps, 1080p, 12mbps.

If you ask me the most frustrating thing about screen recorders then I would say the annoying ads. All the screen recorder that we have suggested above have ads that may annoy at some point. Like after recording a clip when you go back to the recorder you will see full-screen ads.

Well, this recorder is different because it shows zero ads and also provides the best screen recording features. Screen Recorder No Ads give total control to its users for recording screen. From its video settings, you can customize to record your Android screen at the best quality. Coming to its capability, it can capture the screen at 1080p resolution, 120fps, 40mbps, etc.

Moreover, there is an option called the Recording Engine which helps extend the ability of screen capturing. With its advanced recording engine, you can record your screen at 120fps. If you have a good Android phone then we highly recommend going with this screen recorder because it is best for high-end devices.

iRecorder is a perfect example of a simple, stable, and high-quality screen capture Android app. On the app store, its rating is 4.7 which clearly indicates that this screen recorder is best to capture screen. If you are looking for recording games then we highly recommend trying iRecorder because it is best & stable.

Coming to its features, it can record screen at 2K resolution, 16mbps, 60fps. You can adjust the video recording settings to get the most for your Android device. Moreover, there are Facecam option, Draw Tool. These two nowadays are really helpful especially when you are making tutorials.

Apart from that, iRecorder is free to use, requires no Root, No watermark, No time limit. You can record screen unlimited hours if you have storage space on your phone. Give it a try and we ensure that you definitely going to like it.

Another simple to use screen recorder with lots of amazing features. REC Screen Recorder allows to record screen at high quality along with great audio quality. This screen recorder is truly made for making tutorials on Android. However, it has all the features that you need to record screen, create video tutorials with a great explanation. It supports both Internal & MIC audio which can be managed from its settings.

Also, it has multiple options for screen recorder i.e Shake device, Stay Awake, Show Touches, Add Watermark on video, and more. Overall, you can go with this screen recorder for making tutorials on Android. It also has basic features to edit the recorded video as well.

It is an advanced screen recorder for Android that has two engines – “Default” and “Advanced”. With its default engine, you can record a fine quality video with your own watermark. And also use its tool to draw or write on the screen with different colors & font. On the other hand, its advanced engine is quite cool as it supports pause & resume and also unlocks higher fps which prevents pixelation in videos.

Moreover, you can switch the camera while recording i.e from front to back or vise-versa. And once you are done with recording your Android screen, you can edit the recorded video in the ADV Screen Recorder and right away share it with everybody on social media. This Screen recorder is capable of recording at 1080p, 16mbps, 60fps. Overall, whether you are looking for a Gameplay recorder or recording tutorial, ADV Screen Recorder is best for all.

These all are the Best Screen Recording apps which is specially tested by me and through this article, I described my experience with these screen recorders.

Don’t worry if you have a lower Android version, you can use Mobizen for screen recording.

I recommend you use Game Screens recorder and Screen Recorder – No Ads. Both have an amazing ability and I’m sure it gonna satisfy your recording requirements.

So, that’s it. Hopefully, you have found this article helpful and you’ve got a perfect screen recorder that is suitable for your Android phone. If you liked it, share it with your friend and let him/her know about the best screen recording apps.