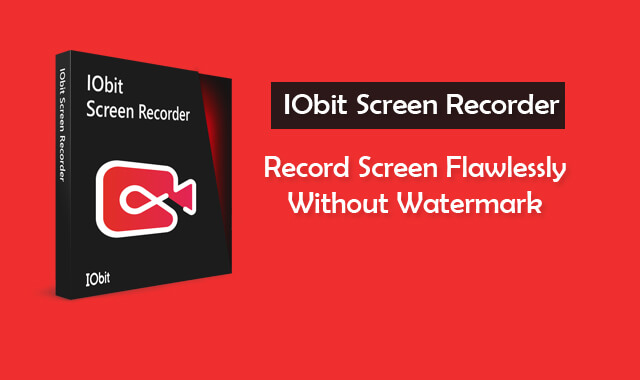 Recording screen is now a vital habit of millions of users who interact with the world online. Whether you are a tutorial maker, YouTuber, class teacher, or just creator who record screen for teaching others then you know the importance of screen recorder. Without having a good one, you might not be able to get the most out of the information that you create and share via recording the screen of your Windows PC.

As you put time and effort into recording the screen, you don’t want your recording tool to get crash or stuck in the middle. Also, most screen recorder tools that say it’s free are not as they put their watermark on recorded video that helps promote their tool for free. Well, the case is different with IObit Screen Recorder. You not only get a chance to use it for free, but it also doesn’t put its watermark on recorded video and provide extensive features.

It is a completely free package for recording screens and editing recorded videos. Unlike other free screen capturing tools, IObit Screen Recorder is quite better in terms of features as well as performance. You can use it to record everything i.e long tutorial, gameplay, conference call, etc. It supports all the Windows versions like Windows 7, 8, 8.1, and 10. You can use this screen recorder flawlessly even if you have a low-end PC as it offers to set your own preferences for video recording.

Moreover, after recording your video you can edit them without taking the help of any other third-party video editor. However, it comes with basic editing features that help cut, trim, and split videos. These features are helpful to use after recording to get the final raw footage for further editing on an advanced level. Using the best screen recorder online, you can record the screen at 4K without any lag as it has been optimized properly. It has achieved an average of 8% CPU utilization while recording which is fantastic.

Multiple Outputs are also available so you can easily convert videos on the demanded format. Currently, it supports over 12 video format and allows to convert in between any format you want. This will avoid incompatibility issues with any mainstream digital devices, you will be able to play the video on a modern iPhone as well as on an old MP4 Player. Overall, IObit Screen Recorder is a phenomenal tool that is completely free and offers a wide range of options for comfortable screen recording on Windows PC.

It offers robust features that help ease video production. With its wide range of features, you can record your Windows PC screen the way you want. Whether you want to record full screen or a specific area, you can record that easily. Let us show you all the stunning features of the IObit Screen Recorder.

IObit Screen Recorder gives you the option to capture the full screen as well as any select area of the screen. This feature is very useful because using it you can merely record the screen area you want, you can avoid capturing any personal area and just capture a window dialog box. Also, it supports multiple displays. You can get started with a variety of screen size options (Full Screen, Select Window, Select region, Fixed Ratio 4:3, Fixed Ratio 16:9).

IObit Screen Recorder tool is super optimized. Like even if you are recording your Windows PC screen in high-quality, you’ll be unfaced from lags. The tool allows to record screen in 4K quality and has achieved an average 8% CPU utilization, making recording extremely smooth. ISR also works fine in low-end PC, you can customize the video recording setting to best suit your PC.

The tool can record audio while screen recording. It can record audio simultaneously from Speaker, Mic, and Mouse click. You will get a stunning recording experience because you won’t need any external help to record audio specifically for your video. There are also multiple audio formats (AAC, AC3, MP3, FLAC, WMAV2) and Frame Rate options (32Kbps to 320Kbps) that you can play within the settings.

You are allowed to record and convert your video in more than 12 formats i.e MP4, AVI, MKV, FLV, MOV, GIF, and more. You can create a video in the format your group demands. Having this feature, you will be able to create supported videos for mainstream digital devices hassle-free. No need for third-party video conversion software like Format Factory, just record in the format of your choice and break the video format support issue on any platform.

Read More: How to Record Screen in Android Phone with Internal Audio

How to Record Windows PC Screen with IObit Screen Recorder

To capture your Windows PC screen with IObit Screen Recorder, you don’t have to do much. With a few clicks, you can start capturing whatever you like on your PC. Let us show you how.

In our opinion, IObit Screen Recorder is the best free screen recorder available for Windows PC. It has all the features required to capture the screen in the best way possible. And most importantly, it is completely free to use and it doesn’t put its own watermark on videos. That’s the most significant benefit you will get out of this screen recorder.