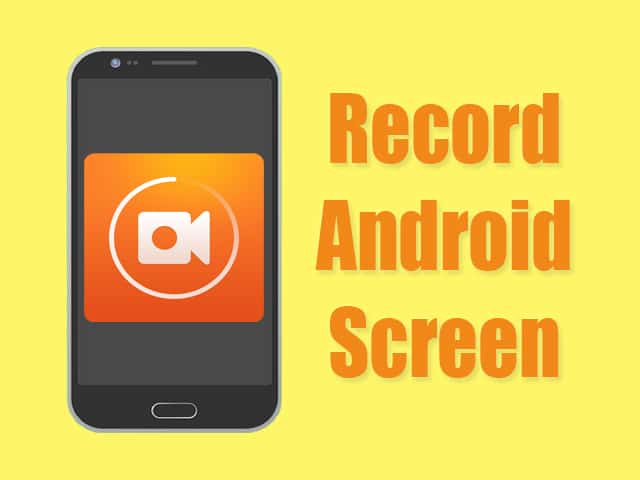 Record Android Screen is something Android users want to learn to basically start their Channel and make some cash. But they end up finding Best Screen Recorders and don’t stick with one to explore its best settings to record screen at the next level. Yes, it’s true that not all the screen recorders can provide you every feature that needs to recorder screen comfortably. And according to my Experience, I have found that Du Screen Recorder works best compared to any Screen Recorder available in the App store.

No screen recording app can beat Du Screen recorder in terms of feature and recording quality. It has almost everything you will need to Record Android Screen perfectly. Even, you can edit your recorded video on Du Screen Recorder. Means, now you don’t need to purchase a bundle of Video editing app from the Google Play store to edit like a pro. Du Recorder has essential to premium features in its video editor available for free.

Well, in this article I will dig deeper into the screen recorder and provide you some cool knowledge along with a guide to Record your Android Screen with Du Screen Recorder. Let’s get started.

What is Du Screen Recorder and What it Provides?

Du Screen Recorder is a free screen recording app that allows Android users to record their phone screen with ease. It provides recording options in a vast amount to its user. From Video settings to add your own watermark on your recorded video. It doesn’t add their own. Even it lets users add their own watermark. Du Screen Recorder provides very useful recording tools including taking Screenshot, Enable front Camera, Record GIF, Show touches, and more.

The control settings in the recorder have also very useful options like Recording mode, Hide the record window when Record, Shake phone to stop recording, Disable pop-up notification after screenshots, Countdown, Hide the recording button on Homepage, Keep recording when Screen is off, And pause recording for incoming calls.

Moreover, you can live stream using Du Screen Recorder, it has its own Live streaming section where Du Recorder users can watch and subscribe to the channel if they want more streaming in the future. It’s very similar to Youtube live streaming. So, whether you need a screen recorder, want to live stream, Edit a recorded video, all can be done with Du Screen Recorder. Now, let me explain some of its awesome features.

As you now know that Du Screen Recorder if filled with tons of features that ease the video production in Android phone. I have dug dipper and found some best features that will be worth explaining, here:

The recording mode is something low configuration device owner can take advantage. With Recording mode, you can select a recording mode for the low-end device and high-end device. Most of the Low-end Android users struggle in finding a lightweight screen recorder for their Android. And this thing Du knows and that’s why it has provided an option for low configuration Android that will help them to record screen. I will later guide you in this article on how you can record screen in your low-end Android phone.

Du Screen Recorder comes with a great UI crash repairing function that instantly fixes the crash whenever happens during recording. In some Android phone, sometimes no screen recorder works, it continuously crashes. In case, you can use the Repair System UI crash feature in Du Screen Recorder to repair and start recording screen of your Android phone.

4. Take Screenshot at any Moment in Android

So, these are the four best features of Du Screen recorder that I found useful and rare. Now, let me show you how you can record your Android screen with the recorder.

Here are the easiest steps to record the Android screen with Du Screen Recorder:

With these steps, you can start recording your Android screen using Du Screen Recorder. Now, as I little said above that I will provide you steps to record screen in your low-end device, let me complete my promise and provide you the guide.

Recording Android screen in low-end device seems impossible for most of the Android users. But that’s not true. Du Screen recorder has made this possible and now you can easily recorder your low configuration Android. Here is the easiest way to record screen in low-end Android phone:

With these easy steps, you can start recording screen in your low configuration phone. The basic mode of Du Screen recorder requires the least Android resources which results in successful recording even in low-end Android phones.

Must Read: How to Record Screen in Android Phone with Internal Audio

In the App store, you will find plenty of screen recorders with a high rating and when you use them, you will find most of them useless. I have experience in that field of around 1 and a half years, I have done Youtube for a decade and that’s why I know much about screen recorders. As of now, Du Screen Recorder is the best Screen recorder available for free on Android’s app store.

And trust me or not, it will help you recording screen in your low-end phone without any lag. The technology it has is just great which enables it to capture screen in any Android phone efficiently. If you still want me to talk more about this screen recorder then the comment is open.

Hopefully, you’ve learned to record Android Screen using Du Screen Recorder? If so, I appreciate if you share this article with your friends and make sure you let me know your thoughts in the comments below.