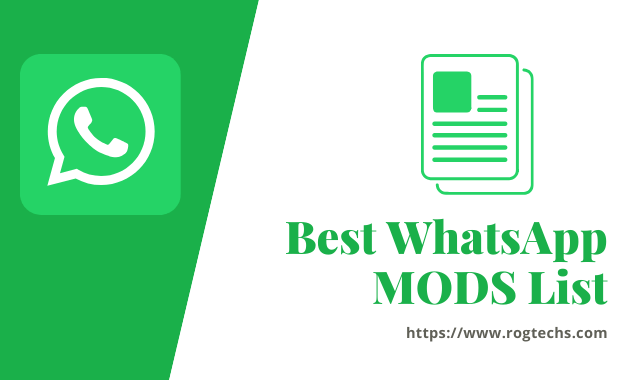 Best WhatsApp MODS are the ones that are feature-rich, fast, and get frequently updated with bug fixes, new features, enhancements, etc. Nowadays, Android users are preferring those types of apps which come with useful features. Having useful features in the forked versions of WhatsApp make users’ life easier. As a messaging platform, WhatsApp still doesn’t have enough advantageous features and some of its features are also limited to use.

Because of that, the massive user of WhatsApp moves to its forked versions like GBWhatsApp, FMWhatsApp, and WhatsApp Plus. These Best WhatsApp MODS come with additional features and they also don’t have any limit on using features. In these WhatsApp MODS, you can have WhatsApp’s default features along with the advanced features on top of it. All in all, it drastically improves the user experience. In this article, we will share the best WhatsApp MODS app that you can download and start using.

When I first heard about WhatsApp MODS, I first installed the GBWhatsApp. It is the best-forked version of Stock WhatsApp and it is also the most popular among all. GBWhatsApp has a mind-blowing interface as well as a ton of features for customization, privacy, and security.

Recently, it has also survived the heavy ban issue faced by WhatsApp MOD users worldwide. And now, it has an advanced Anti-ban feature that protects its user from getting banned by WhatsApp Inc.

Talking about its background, its prime developer left the development years ago that now is being continued by a well-known developer called Fouad MODS. The latest GBWhatsApp offers tons of features including:

I have only listed a few features of GBWhatsApp, there are quite a lot of fascinating features that will blow your mind. We highly recommend trying this if you are looking for the best WhatsApp MODS.

Another known WhatsApp MOD is FMWhatsApp. The fact is there isn’t much difference between GBWhatsApp and FMWhatsApp, all the features on both are precise. FMWhatsApp is developed by the same developer as GBWhatsApp; Fouad MODS. It has all the prominent features in categories like security, privacy, theming, and more. It is safe to say that having these features on FMWhatsApp makes it outstanding in the competition for the best WhatsApp MODS.

Using it, you can have total control of your privacy on WhatsApp. From hiding last seen to not letting your friends and family know that you’ve viewed their status, it is all available in FMWhatsApp.

WhatsApp Plus is a little different from the two WhatsApp MODS listed above. It is also less in size compared to FMWhatsApp & GBWhatsApp. The latest version of WhatsApp Plus has a lightweight interface as well as a few stunning features for Privacy, Security, and Customization. It supports Android KitKat and all the upper versions including Lolipop, Marshmallow, Nougat, Oreo, Pie, etc.

The following are the main features of WhatsApp Plus:

WhatsApp Plus is a great option for people who want advanced privacy features and customization options. It also has a unique interface that isn’t offered by any other WhatsApp MOD.

It is an excellent Forked version of WhatsApp because it offers a simple user interface with stunning features for every important thing. YoWhatsApp is famously known as YOWA which has been developed by Yousef-Al-Basha. At present, it is used by millions of Android users with more than a 94% satisfaction rate.

This means you are more likely to love using YoWhatsApp than stock WhatsApp. But you cannot use both at the same time, you will be logged out from one when you sign in on the other.

YoWhatsApp is one of the first WhatsApp mods that was initially launched as an advanced version of WhatsApp. You can install it now using the below button.

Fouad MODS has modified the stock WhatsApp and relaunched it as their own app with the name Fouad WhatsApp. It is a duplicated version of WhatsApp that contains all the Stock WhatsApp features plus some advanced features. The advanced features are basically the same features that Fouad MODS has dubbed in GBWhatsApp & FMWhatsApp. To name a few, they are Hide view status, hide last seen, app lock, chat hide, theme customization, etc.

It is a new WhatsApp mod that recently has been introduced by JiMODs. JTWhatsApp’s popularity has spiked and now it has a great user base. People prefer this new forked WhatsApp because of the tweaks that its developer has added. Because of the aggressive modification, JTWhatsApp runs quite efficiently on low-end phones. Features-wise, it is far from behind. However, it comes with all the latest mod features that other popular WhatsApp mod comes with.

JTWhatsApp by JiMODs gets updated frequently with new features, enhancements, and fixes. All in all, it is really one of the best WhatsApp Mods that promise security, privacy, performance, and updates.

If you are looking for all the WhatsApp mods features and fun while using them, Blue WhatsApp is for you. It is one of the newly introduced forked WhatsApp that has all the fun stuff including a very similar stock WhatsApp-type interface. When using it, you don’t even have to stress yourself to find any specific feature. However, all features including the mod features are well categorized.

Blue WhatsApp has recently gained popularity and users love it mainly because of its frequent updates, bug-free experience, and support for lower Android versions such as KitKat. It has been developed by “mhndm”.

If you don’t trust any of the WhatsApp MODS listed above then I want you to try OGWhatsApp. Since it has been released publicly, it has never faced any trouble. When it comes to performance, security, and updates, OGWhatsApp has also been people’s favorite. It comes with a variety of customization and privacy options. Also, it’s very stable and barely lags on any Android version including the old ones.

OGWhatsApp has the following useful features:

OGWhatsApp is truly the Best WhatsApp MOD and I highly recommend trying it at least once.

I highly recommend trying this Tweaker because it is genuinely a better option than using WhatsApp MODS.

The WhatsApp Tweaker has the following features which help in the modification of WhatsApp:

You can download the official latest WhatsApp Tweaker app below.

If you ever disliked the accent color green of WhatsApp then you may like this Red WhatsApp MOD. AZWhatsApp is the only app that looks totally different in terms of interface & design from all the WhatsApp MODS. It has developed by the developer famously known as “Sam MODS”. Like other MODS of WhatsApp, it also has some advanced features that help WhatsApp users customize everything properly.

Also, the new version of AZWhatsApp comes out almost every new month which contains the latest features, bug fixes, and performance tweaks.

Here are the main features of AZWhatsApp that are available in the latest version:

Overall, the AZWhatsApp is also a good alter version of WhatsApp. You will really like its fantastic interface as well as its features.

Update 2023: The AZWhatsApp development is no longer supported by Sam MODS since 2019.

What are WhatsApp MODS?

WhatsApp MODS are modified versions of original or stock WhatsApp. It contains some advanced features & allows users to customize almost every element in WhatsApp. These apps are built by third-party individuals, not by WhatsApp Inc.

WhatsApp MODS are safe to use?

Most of the WhatsApp MODS are made by third-party individuals who don’t provide much information about themselves. Meanwhile, it’s hard to clearly answer this question. But as per the data & news, there is not a piece of single bad news that has been heard or written about these MODS. Like Data breaches, User data selling, and stuff like that. So, it’s safe to say that WhatsApp MODS are safe to use. But it also doesn’t mean that it is safe for the future as well, the risk is still there in using WhatsApp MODS.

Which is the Best “GBWhatsApp”, “FMWhatsApp”, or “WhatsApp Plus”?

Best WhatsApp MODS are only a few i.e GBWhatsApp, FMWhatsApp, Fouad WhatsApp, etc. Using any other is not advisable especially the ones that are outdated and no longer supported by the prime developer! The listing has been done considering the popularity, features, privacy, and performance of every WhatsApp MODS. We have also put download links so you can try all of them.