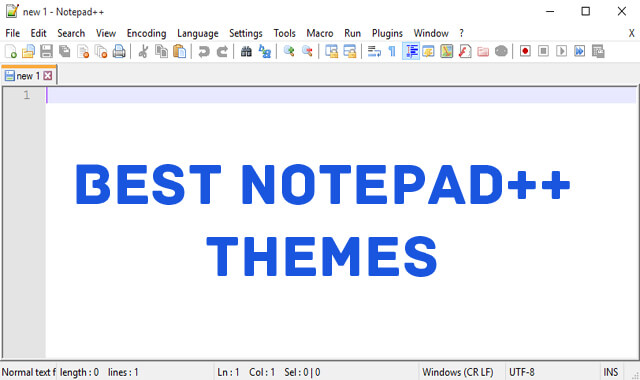 Best Notepad++ Themes with Download link to change the native color scheme of the best text & code editor Notepad++. After the default editor of Windows, we all prefer using Notepad++ because of its stunning interface and convenience to write code or simple text. It also comes with features to extend its functions i.e Using Plugins. There are more than enough plugins for Notepad++ that help fulfill all kinds of needs for this fantastic editor.

The main reason why we all at some point shift to this editor is that it supports many languages & symbols. If you are a Windows PC user for a quiet time then you are probably aware that Microsoft Windows native text editor doesn’t support many languages & symbols. And that makes us move on to Notepad++. Well, Notepad++ can look more beautiful and fascinating if a theme is installed. The Notepad++ themes may not extend the features but will definitely make it more user-friendly.

How Theme Can Be Implemented in Notepad++

Implementing a .xml theme for Notepad++ is easier than said. And the whole process will only take a few minutes. However, you just need to download the .xml Theme file on your Windows PC. And then move the .xml Theme file to C:\Program Files\Notepad++\Themes. If the Theme folder doesn’t exist under the Notepad++ program folder then you will need to create one manually.

Once the XML theme file is placed correctly, relaunch the Notepad++ if it was already running, and then click on Settings from the top menu bar. From Notepad++ settings, click on Style configurator. After that, click on the Select theme: drop-down menu to select & activate the theme you added. The theme will be activated immediately upon selecting it and requires no restart.

Lately, Notepad++ has implemented some basic in-built themes which look great but are similar to the pre-installed ones. Third-party developers have created more beautiful & user-friendly themes than the in-built ones. You can follow the same procedure to check out other in-built Notepad++ themes. So, hopefully, now it’s clear to you about the Theme implementation in Notepad++. Let me provide you with some best Notepad++ themes including the most popular Dark Themes.

The themes we are going to provide here are the hard work of many developers. They have put months of hard work into making their theme so I request all of you to appreciate them if you find their theme useful. Now, without any ado, here are the 12 best Notepad++ themes of 2023.

Dracula Notepad++ theme is the most popular dark theme currently available for free. It is developed by Dracula Themes contributors which are used by mass users of Notepad++. The theme has a dark background and a pink & green color combo for the codes & text. This combination helps protect us from eye strain and allows us to work for a long period of time without feeling tired. It is best for coding because its color combination of text & background is fantastic & user-friendly. Must try Dracula Theme if you are looking for a great dark theme with the best text color combo.

A simple dark theme that is based on Monoco font that comes with a soft color combo for codes & text. A dark background along with light text color is the best combination for coding especially when you are writing complex codes. You might need to wear a goggle to make the text visible clearly to your eye or simply increase the brightness of your screen. Overall, Notepad++ Material Dark Theme is an excellent simple dark theme for the best code editor for Windows.

A modern elegant & clean theme that also has a dark background built for a fluent and clear workflow. It supports all the programming languages and is based on the Nord color palette. Due to its color and dark background, you can work for longer without facing eye strain issues. This Notepad++ theme is truly made for developers since it has all the features developers require.

A beautiful Notepad++ theme that supports syntax highlighting for gmod13 libraries, MySQL, and gm navigation modules. If you have a vision problem or you face difficulty in identifying colors then the LUNAR Notepad++ theme is perfect for you. Because its color combination is just fabulous and strong. Unlike the three themes we suggest above, it has a strong text color combo which helps read codes effortlessly because the codes & text appear strong due to its strong color. Give it a try and we promise you won’t regret it.

It is a port of Ethan Schoonover’s Solarize color scheme to the Notepad++ template. Unlike many other low-contrast color schemes, it decreases contrast but retains syntax highlighting readability. Its background is blue & dark which makes it look like a dark theme. And having this color, we feel much better to work. The theme is designed for coders who mainly code at night.

It is a port of the Mozilla web-based code editor that comes with a brown color scheme. The contrast brightness of text colors is also clear & strong which means we can easily read the text & codes. Since it has a brown background, your eyes will be away from eye strains.

Another great material-based Notepad++ theme that offers a simple interface with an eye-friendly color scheme. if you don’t care about the brightness contrast in your theme then this Mariana Notepad++ Theme will best suit you. It will help you in long-term coding and also avoid eye strain because of the eye-friendly scheme color. It is inspired by Mariana Themes, which comes with Sublime Text 3’s Build.

This theme is a match of Visual Studio Dark Theme Style which was released in 2015. A very simple yet beautiful theme comes with a dark background. It automatically increases the darkness of the working line in the editor which helps stay focused on the line to speed up the coding or writing in the Notepad++ editor. Unlike other themes that we suggested here, it is not fancy or feature-rich. If you love simplicity over too many colors then it is suitable for you.

Another ported & inspired theme is based on the OneDark syntax theme from the Atom editor. For writing & coding, it is a good choice because contrast brightness is not strong or low, it is normal. The developer has worked out to make this like a dark theme yet it is not but provides the same benefits as the Dark theme of nowadays. The theme looks more beautiful when combined with Roboto & Mono font from Google.

ICLS theme looks exactly like the default editor of Notepad++ but it’s actually not. It comes with a white background along with multiple color combinations for text & codes. And that separates it from the default editor. If you want to try a theme other than the Dark themes that we have mainly suggested here then ICLS Notepad++ Theme is the way to go.

Obsidian Notepad++ Theme offers multiple colors for text & codes and a dark background color scheme. Understanding codes will become easier without even reading the full code if you understand the color pattern of the Obsidian Notepad++ Theme. And that will also improve your speed & productivity. This theme is created by Kolin Kirk, initially, it was made for eclipse and later ported to many editors including Notepad++.

A simple yet beautiful theme for Notepad++ that comes with white background & different colors for text & codes. Its overall interface is very similar to SublimeText which is popular for relaxing coding. The color combination will always help you to stay in a good mood and you might sometimes closely look around the editor just to feel good. The Bottom Line, it is best for hardcore coders & web developers.

Working on the Notepad++ editor for a long period of time with the default theme can make you feel bored. Because the native theme is very basic & it doesn’t have any color combination like many other third-party themes have. We have listed the 12 best Notepad++ themes that are absolutely stunning. Most of them have a dark background which means now you won’t get eye strains. If you like white backgrounds then we have also listed them for you, try them one by one to find the best Notepad++ theme suitable for your work.

If you have any suggestions regarding the Notepad++ Themes then let us know through the comments below. In the end, share it with your friends who also looking for great theme packs for Notepad++ Editor for Windows.