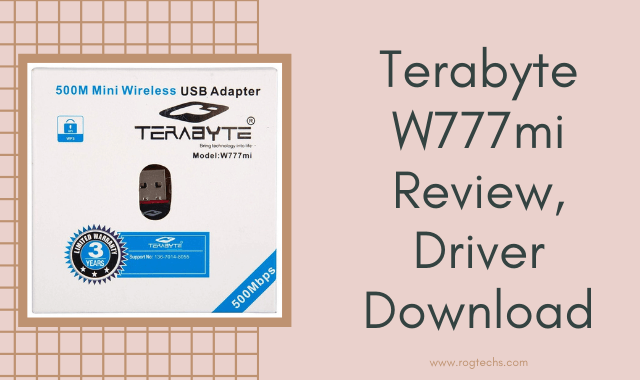 Are you looking for the best WiFi adapter at a cheap price? Congrats! You are at the right place. Today’s post will clear all your doubts about the best and cheap WiFi adapter. So, you got the gear name? Good. The Terabyte W777mi model will probably fit well in anyone’s pockets. It is best in price, quality, and trust. You will never get stressed out while surfing the Internet & downloading large files.

Well, along with the complete review, we will also provide you Terabyte W777mi Driver download link for Windows and Linux PCs. Also, you will learn how to properly install the driver and start accessing the Internet through the network adapter. Now, let’s get started.

What is a WiFi Adapter?

WiFi Adapter is an internet tool that allows connecting to portable WiFi hotspot from Phones and other WiFi hotspot devices. Basically, it is used for networking purposes in computers and laptops.

It is the most widely used networking tool, the WiFi Adapter is a fast solution for PC users because it easily gets connected to any WiFi hotspot available around. It auto-scans for WiFi, requires to tap on the identified network, and enter the password. Once the password matches then enjoy the high-speed internet.

Terabyte W777mi model is one of the best WiFi adapters available at a cheap price. And the best thing about this Adapter is anyone can afford money for it without sacrificing anything big. Terabyte W777mi is available at only 250rs, it can deliver Internet speed max up to 500Mbps while downloading. Although, we don’t have such a high-speed Internet connection to test it. But the Terabyte promises that their W777mi product can give Internet speed up to 500Mbps. Well, let’s see what qualities it has.

Terabyte W777mi have the following Qualities

Terabyte W777mi will give you the seamless experience of the Internet because of its ability to stay strongly connected to a WiFi hotspot. Even if the WiFi hotspot changes its position and goes after the radar, it will automatically get connected to the network when it detects the presence back again.

Have you lost your W777mi driver CD somewhere in your house and looking for the Terabyte W777mi driver for Windows or Linux PC? I understand the probability of CD loss is high because most of us think it will never get lost and take it for granted. And after months or years, we eventually forget the place where the CD was placed. If this exactly has happened to you then please don’t worry. Because I’m going to provide you the download link of Terabyte W777mi for Windows and Linux PC.

Once you’ve downloaded it, you can follow the below “Setup guide” to install it on your PC and again start enjoying the Internet seamlessly.

How to Setup Terabyte W777mi Adapter and Driver on PC

The installation of the Terabyte W777mi WiFi adapter and Driver is very simple. If you purchased this device then you’ve got the manual too which basically describes the features and installation process of it. You can follow that to setup it.

Well, nobody likes to read the whole manual because of too many extra words in the manual. So, here I’m going to simply describe how you can set up it on your PC in a few steps.

Here are the steps to Install the driver and set up the Terabyte W777mi WiFi Adapter:

And then try to connect to some Open WiFis. At first, try connecting to WiFi with NO password because it will be easy to get connected. Once your USB gets connected try to surf the internet with any browser like Google Chrome, Opera Browser, etc. Just search any random terms such as FB or Twitter and check whether web pages are loading or not. If you face any hardware issues, you can contact the Terabyte service center.

Read More: How to Make USB Bootable With Software and Without Software

Terabyte is a popular brand so you can completely trust this product. W777mi model comes with a long warranty, cheap price, and of course great quality. After using it for a long time, I have found that this is the best WiFi adapter available on the internet at a cheap rate. I have been using this product for 2.5 years and haven’t faced any issues till now.

250Rs. is not a big deal for any PC owned person. So, don’t overthink the price because it’s literally cheaper than most of the WiFi adapter that is available. Overall, it’s a great product and you should give it a try if you are looking for a great WiFi adapter at the cheapest cost.

I don’t think I have to give my opinion after unleashing the qualities of this W777mi WiFi Adapter. But if you need my opinion then I assure you, it will be a regret-free purchase.

I’m personally using this for 2 and a half years and here I turned my experience into this post. Just 250rs, No Big deal!

If you are purchasing this product offline, then make sure you test it before doing the payment. Because sometimes, the seller gives the bad product. And if you have purchased online and got a bad or damaged product then complain about it and return within 10 days to get your refund.