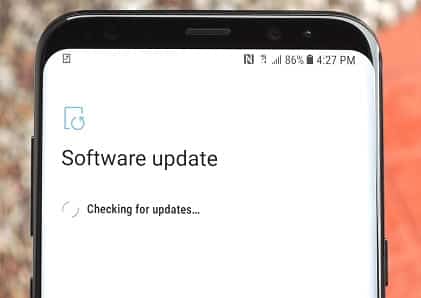 To update the software on Samsung Galaxy phones correctly, you gotta keep in mind some important points which I will explain here. Let’s start this article and let me first explain everything so there be no doubt left in your mind.

What is OTA Update?

OTA stands for over-the-air and OTA update means receiving an update on the phone directly through the Software Update service. This doesn’t contain the use of an external source for file downloading and installing updates. From downloading to installing, all happens in Android phones and other the air.

The update gets delivers in the phone wirelessly and in most OTA updates, default application and Android software get patched with a new version. This type of update happens fast and takes less time. Also, it is the most preferred method to update Samsung Galaxy phones.

How to Check OTA Update is available or Not in Samsung Galaxy Phones?

Read it too: How to Enable VoLTE in Galaxy Note 4 All variants (Updated)

How to Software Update in Samsung Galaxy Phones

I’m going to show you steps that can help in updating software on your Samsung Galaxy phone. And it really doesn’t matter whether you have Lollipop, KitKat, Marshmallow, Oreo, these steps can be applied in all these Androids. Some options may be varied in various Androids but the options will be found somewhere near. Here are the official steps to Software update in Samsung Galaxy phones:

That’s how you can update the software on your Samsung Galaxy phones. You may see the Software update option instead of Download Software manually in About device. The meaning of both is the same so don’t get confused there.

Read more: How to Play PUBG Mobile on Samsung Galaxy Note 4 Without Lag

Things to Do Before Updating your Samsung Galaxy Phone

If you are first time updating your Samsung Galaxy phone then you should know some important things. If you care about these things you will not regret like others. So, here are those things:

1. Make Sure you Have enough storage Space

Usually, when you install any update on phones, a Huge amount of Storage gets reserved on your phone due to the update. Whenever new update gets installed, new files get added to the internal storage and less storage get available. Sometimes, when the phone lack storage space the software updating process gets interrupted. So, to not face storage space problems while updating the Samsung Galaxy phone, make sure you make free space before installing the update.

2. Backup All the Important Files Before Installing Update

You probably have heard many times that you should back up everything before software updating.

To update Samsung Galaxy phones, you just need to follow some common steps that I have shown above. And you will be able to update your Galaxy phone without taking the help of others.

Hoping this helped you? If so, I appreciate it if you just comment on the steps worked or not. Also, comment down below if you have any question, I will help you to tackle it.